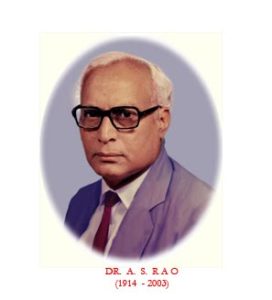 Born in a poor family, Shri Rao evolved into a man of simplicity and humility, with a fune human touch. He is recognised as a man, not merely of strong beliefs, but of action in philosophy of technological self-reliance.

Shri Rao was a physicist by training, but studied later Electrical Engineering in Stanford University. He was associated with Dr Homi Bhabha, the well-known nuclear scientist. Shri Rao was closely involved in formulating policies for development of electronics in he country.

The growth and performance of Electronics Corporation of India Ltd. (ECIL) stand as a testimony to the vision of the Bhabha Committee. Dr A S Rao, an illustrious member of this Committee, translated this philosophy of self-reliance in Electronics into action, the unique success of which has now been universally acknowledged. Under the stewardship of Dr A S Rao, ECIL grew into a major electronics complex supplying to the nation a wide range of electronic systems, instruments and components for diverse applications like nuclear power, defence, communications, agriculture, medicine and scientific research, demonstrating the possibility of a very high degree of self-reliance in the field of electronics in the country.

The Council inform the students and parents that the Science Talent Search Examination which is normally scheduled in the month of December will not be conducted this year due to pandemic (Covid19) prevailing in the country.